Gezer's calendar is the earliest writing that can be considered Hebrew. Some define it as pre-Hebrew, or Hebrew Paleolithic. In my view this would be the Hebrew script, not the current one which is a Persian writing system.
We will study line by line of this calendar, to be able to understand as the people of that time thought.

???? ??? ???? ?
1
two months of harvest, two months of planting.
Here we have the term two months, which is a dualistic form, refers to two periods. What would define two lunar periods, and thus two months.
We will see that these months are respectively From August to September and October to November.


?? ???? ???
2
two months of late planting.
The term late planting is a rare term; represents a proper system of speaking of people directly attached to the field, we can see that term in Amos 7: 1.
Knowing that Amos is a man connected to the field, we can see that the stone is linked directly to someone who lives in a rural environment.
The months in question would be December and January.

??? ??? ???
3
a month of hoeing flax
Flax was grown in the ancient Near East at the beginning of Bronze IV. It has a variety of uses: its fibers can be spun to make flax see in Genesis 41:42; Leviticus 6:10; John 19:40, and the seeds can be pressed cold to make flaxseed oil, used for cooking and medicine.
What we see is the importance for such products.
The month in question is February.

??? ??? ????
4
one month of barley harvest
Barley is a healthy grain that has a growing season shorter than wheat and is also better for surviving drought and intense heat. Grain was used in baking bread and stalks were used as fodder for animals. It was found in Israeli archaeological sites from the Iron I and Iron II eras. See Exodus 9:31; Leviticus 27:16; Ruth 1: 2; John 6: 9; Revelation 6: 6.
Exo 9:31  And the flax and the barley was smitten: for the barley was in the ear, and the flax was bolled.
Exo 9:32  But the wheat and the rie were not smitten: for they were not grown up.
The text is speaking of the time when the Hebrews were in Egypt, and it shows what the stone of Gezer says, that first comes the flax, the barley and then the wheat. Now with the stone of Gezer we can suppose that the plagues said in the verse occurred between January and February.
But in the fourth line of the stone of Gezer we have the month of the harvest of the barley, that is to say we have the month of March.

a month of harvest and feasting.
And here we have the reference of a festival of harvests, usually called firstfruits, or the first fruits of the plantation. That is, the feast of harvests, and the joy of obtaining food. And here we are in the month of April. This party was directly linked to the harvest.

two months of vine pruning.
And here we have months of preparation for a grape formation.
These two months are relative to May and June.

a month of summer fruit.
Summer fruitsee 2 Samuel 16:1; Jeremiah 40:10; Amos 8:1-2.
They are among other pumpkins, cucumbers or watermelons.
Being the month of July.

Now we read the stone of Geze, now it is important to know what is the normal mentality more than three thousand years ago. Now let's try to understand, with some questions for understanding.

1. What functions might this inscription have served?
We see that the Gezer stone has a relationship between the lunar cycles, which represent the months and the planting phases. Therefore the stone would have served as reference for those who planted, what should be done in each lunar cycle during the year.

2. What does this inscription tell us about the agricultural year in Palestine?
Not only in Palestine, but even a reference between planting in Egypt, we see a very intense planting, especially in relation to rye, wheat, and flax. And very specific stages for planting and harvesting, either for the products cited, but also for the summer fruits.

3. What does this inscription tell us about peasant crops? What is the importance of crop diversity and crop rotation for peasant farming?
The inscription shows that the cultivation system is not in monoculture but in crop rotation. The crop rotation serves to conserve the fertile soil. Perhaps the scientific factors behind this were not known, but rather the practical factors, and so the stone of Gezer makes an organization of different cultures.

5. What is the average rainfall in Palestine? How does this relate to the crop cycle?
According to the chart we have the highest rainfall in January and December. What involves that from August to September, there is a harvest and October to November an intense planting. Of course, the crop needs to observe such factors in order to avoid seed loss.

We observe many factors in the Gezer calendar, including the cycles, and we can observe a very direct construction to define the stages of cultivation. I would note that in the period 900 years before Christ, and the connection with the biblical texts, especially the Pentateuch, we have a clear connection, which favors the idea that related biblical texts are indeed very old, relative to the period in question.
I hope you have enjoyed and have built factors that link the text of the Gezer Calendar to the ancient Hebrew texts contained in the Bible. 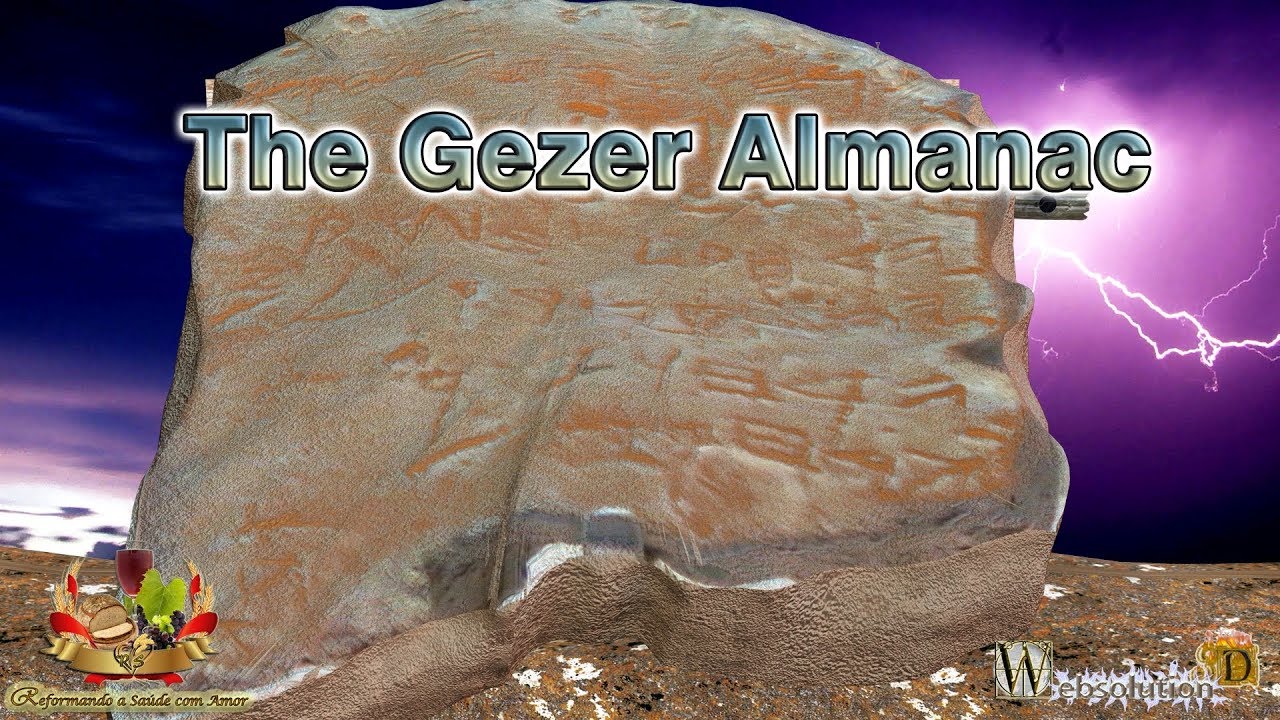