The shadow rituals of heavenly facts need physical objects for man, and sometimes they cannot be acquired because of people's poverty. Thus God has used alterations by limiting the poor, not because the right is changed, but because love can understand the difficulty of each person in the world in which he lives.

Thus we have "if their possessions are not enough for small cattle" 1 , ie the limit is not in God is in man, if man cannot have small cattle then God delimits a necessary factor for man. This can be seen in other facts, for example, David ate of the holy bread "they ate the bread of the proposition, which it was not lawful for him to eat, nor to his companions, but only to the priests" 2 , and even the priests worked on the Sabbath. " in the law that on Saturdays the priests in the temple violate the sabbath, and are blameless, " 2 all these factors are linked to needs.

One of the basic rules of everything is that a need is not a rule. So when you are hungry and at risk of death, you can eat the holy bread, but this is not to eat, it is a case of necessity. Now if the priest does not light the fire in the sanctuary on the Sabbath or does he put out who would light the fire for the sacrifice? In other words, the limiting can never determine the whole.

For example, the rituals of Yom Kippur were performed by the shrine, and throughout the year the shrine prepared for the day of atonement, the shrine as opposed to being poor, was made up of many possessions of the people's gifts, so the ritual system could not be made different from the established rule. Whether it was goats, fire, or any material in the rite, there was no shortage, and in fact it cannot compare with a starving person or one who has no money for sheep or small cattle.

In fact a person who tries to idealize that except for an individual's poverty, is brought to the wealthy priests, has a rational problem in which when giving alms to a poor man, he should automatically separate such for a rich man, which really tends to be a deviation of reason.

When we read about the offered doves, there is a lack of blood for the altar, and so it is necessary to draw blood from a dove, to the point of falling on the altar, if you use only one dove and offer the blood like a lamb. it would not fall upon the altar like a lamb. Thus one is the extraction of the blood, and the other the ritual in an attempt to resemble the lamb. But why did this happen? Because of the poverty of the individual who wanted to participate in the sacrifice and could not. Now if such had possessions this was not the ritual to be done. It may be noted that if poverty is at greater levels we have, "He shall bring the tenth part of an ephah of a flower of flour for a sin offering; he shall not pour oil on it, nor put frankincense upon it, for it is a sin offering;" 1, ie we have flour as an offering, why? Because the person is poor. What is the right offer? A small cattle, and what was the dice? Flour, then we will build that because of man's need, then the rule would be to represent Jesus as flour? No way. Neither where there is no need because of poverty or difficulty will we say that one ritual is another. But kindness is not an excuse to break the rules, but to understand people's difficulties.

Now the foundation of the concept of the dove, and flour is linked to poverty, ie the core of the texts is to adapt the poor, since the goat does not have the function of adjusting the poor, because the group in action is rich. So to say that a poor person has the same chances of getting an object is extremely a factor of ignorance. So much so that God set standards for the poor.

Thus the use of flour as a sin offering is not wrong if one has no possessions, but the correct shadow is to offer small cattle. 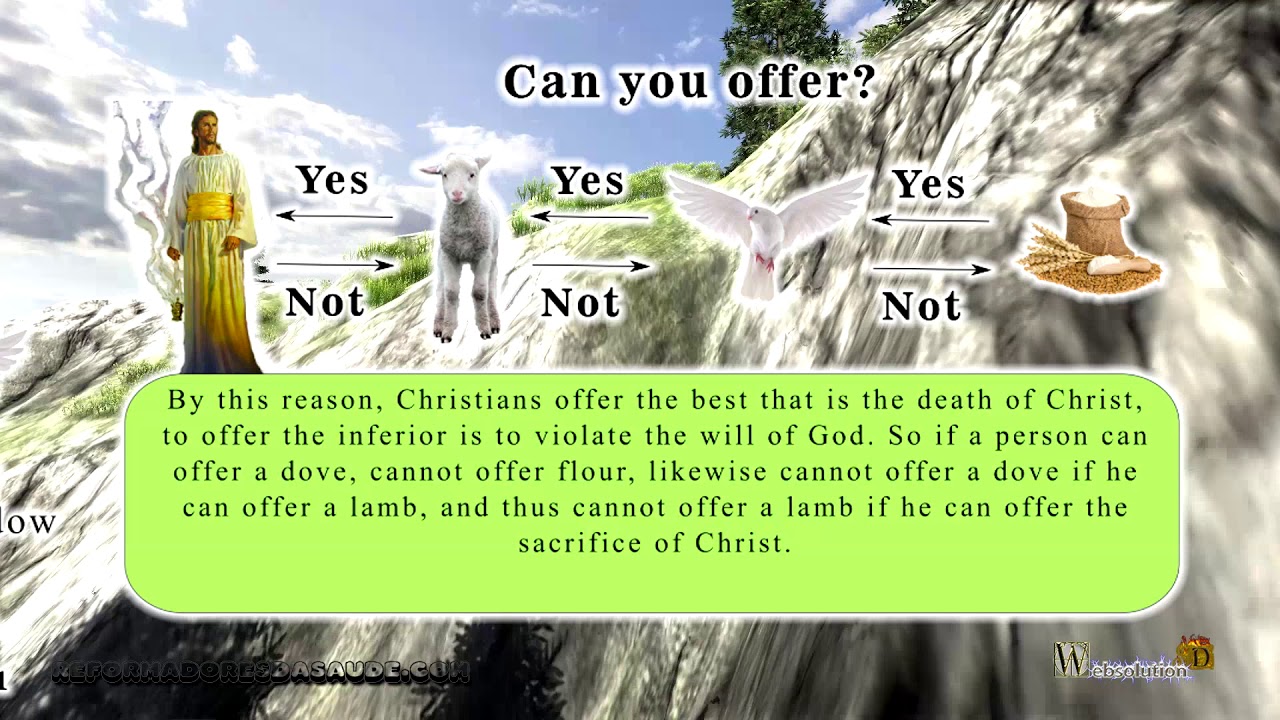