Isa 45: 7 I form the light and create the darkness; I make peace and create evil; I, the LORD, do all these things.

Lam 3:38 Out of the mouth of the most High proceedeth not evil and good?

Amo 3: 6 Shall a trumpet be blown in the city, and the people not be afraid? shall there be evil in a city, and the LORD hath not done it?

Ps 75: 7 But God is the judge: he putteth down one, and setteth up another.

Now then, it is logical that both evil and good are creations of God. But does God do evil? First we have to see some verses.

Tit_1: 2 In hope of eternal life, which God, that cannot lie, promised before the world began;

Dan_9: 14 Therefore hath the LORD watched upon the evil, and brought it upon us: for the LORD our God is righteous in all his works which he doeth: for we obeyed not his voice.

Neh 9:33 Howbeit thou art just in all that is brought upon us; for thou hast done right, but we have done wickedly:

So now we have that God can not lie, and He is righteous. And how to understand this?

The individual X will kill Y, but God destroys X before that, Y for fear that others will try the same thing will kill the 5 people of the family of X who died, having two children under 10, God kills Y before that. One of X's children gets angry at his father being killed and tries to kill someone in Y's family, and it all starts again. Until eventually everyone dies.

So you can not use this.

But if God now kills without others knowing the intent of each one? Everyone dies again, just not knowing why they are being killed.

This one also does not work

So an angel X decides to go against God, before he speaks lies God kills X? The angels consider God evil and murderous and go against God.

God does not create anyone who can make decisions, and as he is perfect, there will be no suffering.

In that case nobody will exist. Basic question, how many do not want to live? I think very few compared to the number of people in the world. So it stands to reason that people prefer to exist rather than exist.

So the logic of non-existence of beings is not a good thing. Because I really like to live.

So the problem is now how to judge.

So X kills Y, what does God do? Kill X? Does X suffer? Do you suffer the punishment? Burn forever in hell? This is fair? It is not there?

If Y's offspring is to end the world, should God kill Y, or let the world be destroyed? How many people in the future would Y's family kill, so God would kill Y before that?

But if Y's family does not kill but torture? How many can be tortured, and what is the force of torture to destroy or not destroy Y who has poorly educated his children, who consequently misrepresented his grandchildren?

If a politician takes money from the population and with that comes 30 murderers, 5 rapists, 40 thieves.

If the politician had been just, there would be only two thieves.

And will the politician be guilty of generating the criminals he created or not?

See that to make fair decisions requires an infinite knowledge of the future and the past. And there is the concept of Evil and Good that God creates.

Man chooses to be in evil or good.

So says the text.

Deu 30:19 I call heaven and earth to record this day against you, that I have set before you life and death, blessing and cursing: therefore choose life, that both thou and thy seed may live:

So God creating the blessing and the curse, the man chooses. God merely gives the result that each one has planted.

Matthew 19:16 And, behold, one came and said unto him, Good Master, what good thing shall I do, that I may have eternal life?

Mat 19:17 And he said unto him, Why callest thou me good? there is none good but one, that is, God: but if thou wilt enter into life, keep the commandments.

Luk 18:18 And a certain ruler asked him, saying, Good Master, what shall I do to inherit eternal life?

What is the love term that the apostles wanted to speak? It's ????? agape, this has to do with love. For example, if a parent reprimands his child so that he does not do something dangerous, that is good, even if the child looks like something wrong.

God does not do evil, he is just. And justice needs to be fulfilled. For example, a person jumps from a building and dies when they collide with the floor. Is gravity bad? Is the floor evil? Why did the man who jumped die? No, this is a consequence.

God built the universe for good, but He has placed beings who can decide. This decision that makes the beings choose whether to use the scalpel to save or to kill. God did not make the scalpel to kill, but he knows that it also kills. So they are beings, they were made to do good, but they can do evil. But God does not do the evil of wickedness, but he does the rebuke and the consequences, which ordinary men call evil.

Let us say that somebody says, "God did not create evil, He did only good, in His own likeness .... Evil, sin and death ... are the result of disobedience, originated in Satan." bible says:

So the person who said that God does not create evil is wrong?

Take, for example, the full paragraph -

God did not create evil. He only did good, which was like him. But Satan would not content himself with knowing the will of God and doing it. His curiosity was on the way to know what God had not designed, he should know. Evil, sin, and death were not created by God; They are the result of disobedience, which originated in Satan. But the knowledge of evil now in the world was brought through the cunning of Satan. These are very difficult and costly lessons; but men will learn, and many will never be convinced that it is a happiness to ignore a certain kind of knowledge, which comes from unfulfilled desires and impure goals. The sons and daughters of Adam are altogether as curious and conceited as Eve in search of forbidden knowledge. They gain an experience, a knowledge, which God never created, should have; and the result will be, as it was for our first parents, the loss of Eden's house. When will humans learn what is so thoroughly demonstrated before them?

In other words, according to the text above, the person is saying that God does not practice evil, that is, that God was not an originator of evil. In other words, would anyone think, for example, that God would practice lying? Adultery and other things? No. The question is what Isaiah speaks.

The term evil, or the creation of evil, is not to do evil. But there is evil.

Isa 45: 9 Woe unto him that striveth with his Maker! Let the potsherd strive with the potsherds of the earth. Shall the clay say to him that fashioneth it, What makest thou? or thy work, He hath no hands?

So evil mentioned in the text that God did not do is the act of doing evil. But the evil quoted in Isaiah 45 speaks of the creation of beings who do evil. And their freedom to do evil. That is, God created all beings, some do good, some do evil, and God created all.

And in the text that is not in Isaiah it speaks of that God did not do evil, but that the beings that disobeyed that they practiced.

In a way it would be a common consensus that God would not be in any case the one who commits sins, on the contrary we have that God does everything in a correct way. Now if anyone does not read the text correctly in Isaiah he would consider that God sins, but God does not sin, knowing that sin is wrong.

For example we have a text that says.

Tit_1: 2 In hope of eternal life, which God, that cannot lie, promised before the world began;

Lying is a bad thing. And God can not lie.

He does not say that mind, but rather creates the lie.

And this is how God does not do evil, but creates the possibility of doing evil. It is not possible to do anything that God has not allowed. But to allow is not to do evil. Nor is it to do evil. For example, if a person decides to lie, God could catch that person's mouth, or not let him lie, or kill the person. That is, if the person lied, it is because God allowed it. This is called free will.

That is, when we say that God creates evil, it is because he created the possibility that beings can do evil. But God does not do evil. He only created evil. Without which beings could have no choice. If only there were good, no one would have the power to choose. 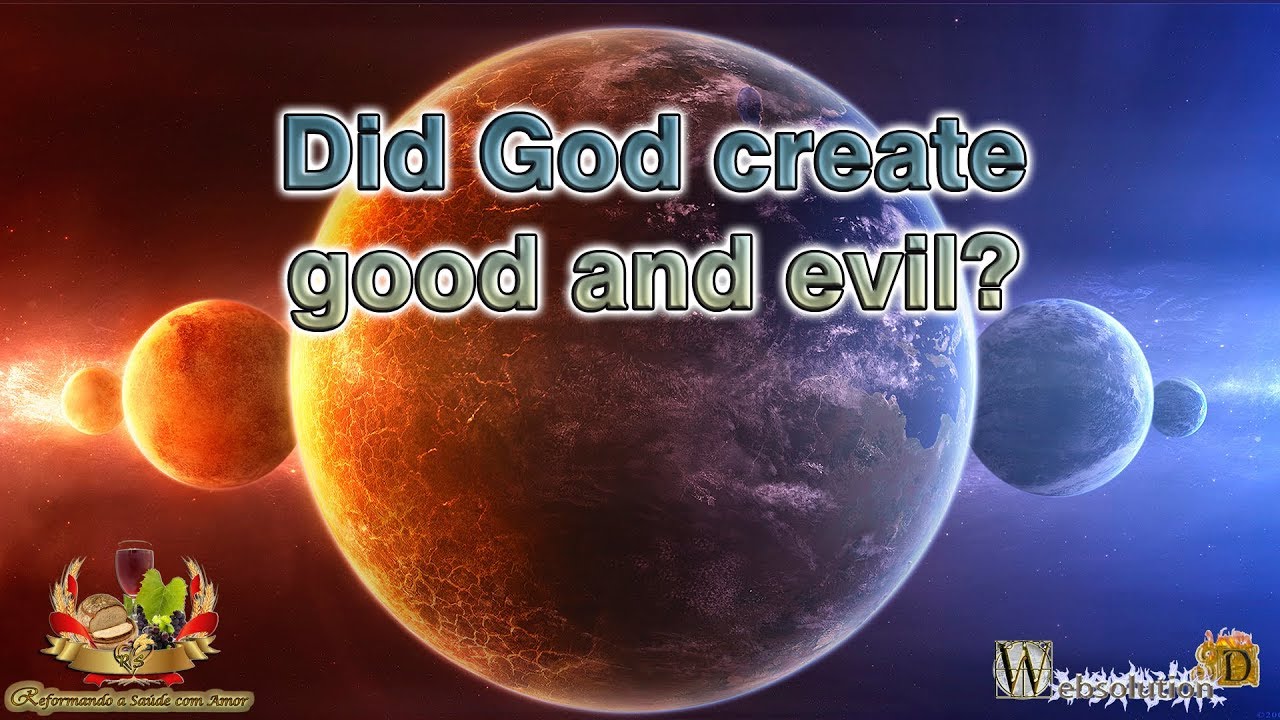