**d**x7f2cs5**df**
The period from the appearance of humans on earth to the development of writing, about 3,500 years BC, is considered prehistory.
The prehistoric denomination began to be used in the nineteenth century. At that time, it was believed that it was only possible to recover the history of any society if it mastered writing.

The conception was that the reliable source for determining a society was the written record. The oral tradition, paintings, the objects found, represented secondary sources and with low confidence.
On the contrary, it may be noted that archeology, in finding objects, has defined which written record is indeed true, and which is the imagination of the author of the text. In fact, writing does not define confidence more than proof of something. How a crime is defined by fingerprints and DNA than mere writing by the innocent.

Even so, writing became the dividing mark between historical (which dominated writing) and prehistoric (which did not dominate writing) societies. What we may find doubtful because images painted on stones, sculptures, vases, and various other utensils can sometimes show a society even better than writing.

Prehistory or History of the pre-literate people?
The term Prehistory was created in 1851 and was intended to designate the period of life of the human species prior to the invention of writing. History would therefore be studied from the moment the first written documents emerged. This idea is much criticized today, after all, humans who could not write also have history. They lived, ate, made objects, and communicated. As we already know, you do not need the written document for historical research. Material culture is also an important source for the historian's work.

From the drawings left in the caves - the so-called cave paintings - the historian can get clues as to what these men were doing, how they thought at last, how they saw their world. From the traces of utensils, tools, the historian can know how these people ate, how they hunted animals, made bonfires, and so on. For this reason, many scholars today prefer to call the Prehistory History of the pre-literate peoples or staple peoples, that is, the history of peoples who could not write.

So the correct term would be unwritten history before period x, and history written after period x. That's because writing didn't come up at the same time everywhere. So what would be considered prehistory in America would not be in the Middle East. Thus we have the fact that both prehistory and written history are part of history, and thus it is irrational to call prehistory something that is within history.

After prehistory, the division of the periods of written history is as follows:
Ancient
Age Middle
Age Modern
Age Contemporary Age

In fact, logic is expected to quickly prevail and prehistory will no longer have that name.

Science that, through collection and excavation, studies the customs and cultures of ancient peoples through material such as fossils, artifacts, monuments, etc.

It is the term given to the oldest known artistic representations, the oldest dating from the Upper Paleolithic period, engraved in shelters or caves.

Prehistory A
term that using logic could not be part of history, but it does. Being therefore only the historical period without the written account, but with reports in paintings and objects, which are also historical sources. A logical term would be pre-written. 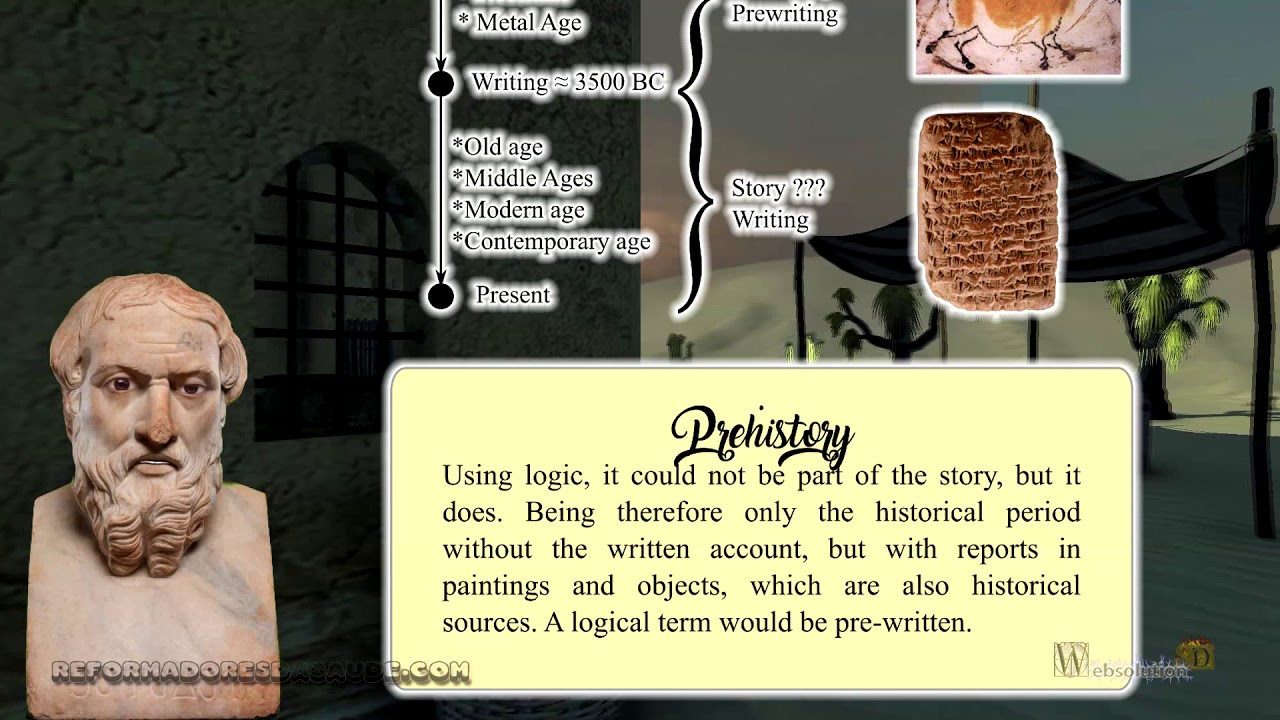